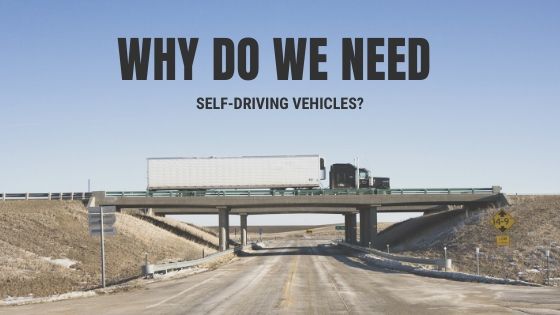 While I’ve touched a little bit about the general advantages of autonomous vehicles in the past, especially in the post about level 5 automation, the topic definitely merits its own exploration.

There are numerous reasons that self-driving cars are needed, but the most important one has to be traffic-related fatalities. Here are some of the biggest reasons we need autonomous driving vehicles:

Let’s delve a little deeper into each of these reasons…

The sortable table from the World Health Organization below shows the top ten causes of death in 2016. The first seven causes listed are things that likely wouldn’t surprise anyone: heart disease, stroke, C.O.P.D., diabetes — terrible ailments that immediately come to mind when we think about mortality. However, number eight on that list is road injury.

This translates to more than 1.2 million people per year dying as a result of car crashes. It’s the leading cause of accidental deaths by a large margin.

Diving further into the morbid reality, if you select the age range for 5-14 year-olds, you can see that road injury shoots to the top of the table. It’s the number one cause of death for children in that age range.

To reiterate, more than a million people die each year because we haven’t figured out how to make driving a safer activity.

Keep in mind, these statistics are for all deaths. If we were to look only at deaths related to accidents, the numbers for motor vehicle crashes would be even more overwhelming.

This is all to say that any technology that will be able to reduce the overall number of car crashes around the world will have an immediate, and significant, effect on mortality rates.

Should we even call them car “accidents”?

Driving is a difficult task, to be sure. If it weren’t, then creating autonomous driving systems that can accomplish the task would be easy. However, a large percentage of the deaths related to motor vehicle crashes involve human drivers actively deciding to do one thing or another that leads to the crash.

Things like distracted driving (texting, eating, etc.), drunk driving, and speeding are all behaviors that humans engage in every day that cause “accidents,” which is why many have moved away from using that language in their reporting. An autonomous vehicle would obviously never do any of these things.

How much do car accidents cost each year?

There are a lot of ways to measure the costs of car crashes, and I want to take some time to breakdown a few statistics from the U.S. Department of Transportation’s National Highway Traffic Safety Administration.

Based on 2010 data, the N.H.T.S.A. reports that the total economic cost for car crashes in a single year were $242 million. I’ve broken down that huge number into its subsections in the graph below.

If quality-of-life calculations are considered as part of the economic cost of motor vehicle crashes, the number jumps to an astronomical $836 billion per year. The math for quality-of-life costs is complicated, but they are essentially a way to use monetary values to represent the various things that crash victims experience. Those include chronic pain, the inability to perform tasks that could be done prior to the crash, and other pains that are very real but don’t necessarily have an obvious numerical cost.

Additionally, quality-of-life calculations take into account the value of all of the future years that would have been expected for those who lost their lives.

Just as with the crash fatality statistics, I’m laying this all out to add numbers to the conversation about why we need autonomous vehicles. In a future where autonomous vehicles prevent all (or at least most) crashes each year, $836 million in future costs could be avoided.

Related to the economic costs of congestion listed above, crashes necessitate lane closures, detours, traffic, and generally additional driving time for many affected vehicles. All of this costs money, but it also causes the burning of additional fossil fuels, which pollute the environment. Therefore, fewer crashes is a win for climate change.

More importantly, many autonomous vehicles are being developed with alternative fuel sources, which are better for the environment in general.

So, while autonomous vehicles aren’t inherently helpful in slowing the progression of climate change per se, their adoption will effectively serve that purpose.

That is, moving toward autonomous vehicles will also mean moving toward electric and even hydrogen-powered vehicles because most car manufacturers are developing those technologies simultaneously. Indeed, some leaders in the autonomous driving industry are seen as much as electric car developers as they are autonomous technologists.

Calculating exactly how much an electric vehicle reduces pollution is a bit tricky, but it is generally understood that they do contribute to climate change less than gas-powered vehicles.

In the short term, electric vehicles don’t produce any direct emissions, so greenhouse gases and smog are not factors in the space immediately surrounding the car. This is especially important for health in densely populated areas where people share relatively tight spaces with a large number of cars.

In the longer term, electric vehicles still do have environmental costs over the course of their life cycles, and the exact amount is dependent upon how electricity is generated in the charge area, when it is being charged, and other factors.

Continue Reading
link to What is Level 5 Autonomous Driving?

We've finally reached the namesake of this site. Regardless of if you interpret the "auto" in level 5 auto to mean automobile or autonomous, you're in the right place to learn more. What is Level...